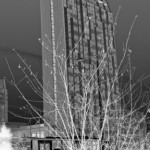 Today, on 6th of June, 2013, a group of members from the Parliament of the Republic of Lithuania as well as the Vilnius City Council members appealed to the President Dalia Grybauskaite, Prime Minister Algirdas Butkevicius, Chairman of Parliament Vydas Gedvilas, Vilnius Mayor Arturas Zuokas and the ruling coalition because of  the first phase of the reform of Vilnius city transport system, which is expected to start from the 1 of July, 2013.

The appeal stressed that after the proposed reorganization, the city will face additional huge stream of cars, and Vilnius transport infrastructure will be even more overloaded.

Also, this appeal is also mentions that:

„- it is not adequately prepared for the reform, possible scenarios of impact to the urban transport system are not modelled;

– the reform is not transparent and systematic, there is no political support from the City Council, despite this, there are attempts to implement it under administrative decisions, bypassing the democratic process of municipality;

– the reform is not motivated by benefit to the residents of Vilnius and the common good reasons of the city, instead that it possibly serves to individual interest groups;

– the implementation of reform will result inevitable chaos and very likely collapse of the transport system in the city;

– planned beginning of this reform is at 1st of July, 2013. It is chosen very imprudently, without combining to the interests of the country, regardless the circumstances of the Lithuanian Chairmanship of the EU Council, perhaps with the intent to – or at least with inconsiderate and reckless actions threatening – to harm the Lithuanian Chairmanship and the image and reputation of the country.“

It is proposed to stop the process until the treat to the Lithuanian Chairmanship of the EU Council will disappear. It is also expected that the transport system reform concept will be prepared which will be systematic, transparent and will serve real interests of the residents of Vilnius.

Full text of the appeal (in Lithuanian) can be found here.

The question is – is this justified appeal will force the ruling majority of the city to think on their actions and will stop the “reform”? If not – what should happen in order them to understand the damage done to the city with these actions?

On 7th of May,  2013, member of Parliament of the Republic of Lithuania Arvydas Anusauskas has issued a press conference “The public transport reform carried out by Vilnius City Council does not meet the expectations of people. “ END_OF_DOCUMENT_TOKEN_TO_BE_REPLACED