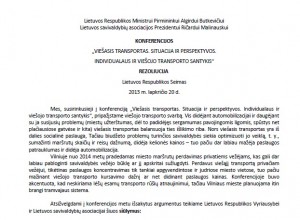 END_OF_DOCUMENT_TOKEN_TO_BE_REPLACED

As it was already mentioned, on the 13th of May, 2013 there was a meeting of Vilnius City Council Petitions Commission, where a petition (which was handed 2013-04-26) on Vilnius public transport optimization was discussed. As far as it is known today, in the nearest future a special working group of the city’s management representatives’ will be created, and they will continue to work on the petition. The latest news and decisions will be published here as soon as possible.

These days a letter was received from the Government Representative in Vilnius county, signed by dr. Audrius Skaistys. This letter is published below.