Sorry this article is not available in English yet. You can try Google Translate to get (not very precise) translation. 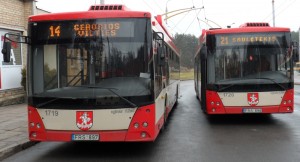 As has been reported on the site already, on 10th of May, 2013, Mayor of Vilnius Arturas Zuokas and Lithuanian Transport Minister Rimantas Sinkevicius have received a letter from Mr. Alain Flausch, Secretary-General of International Public Transport Association which unites 3,400 member organizations from 92 countries.

In less than two months (sarcasm) the mucinipality of Vilnius city has prepared a response (we are also presenting a formal response from the Ministry of Transport and Communications of Lithuania).

Response from the Ministry of Transport and Communications of Lithuania to this letter:

The Ministry of Transport and Communications of the Republic of Lithuania acquainted with International Association of Public Transport opinion about trolleybus system in Vilnius and is grateful therefor remarks.
Moreover the Ministry of Transport and communications sustains that trolleybuses are important elements for sustainable urban development as an attractive, affordable and quality-driven mean of urban mobility.
According to the intelligence municipality of Vilnius city actively encourage the use of public transport for daily trips and pursue to secure qualitative and attractive public transport facilities in association with aims of the Directive 2009/33/EU on the promotion of clean and energy- efficient road transport vehicles.

Ministry of Transport and Communications of the Republic of Lithuania, Gedimino ave. 17, Vilnius

A reply from the Vilnius city municipality has been received today  (original scan is attached at the end of this entry):

We appreciate your concern expressed with regard to the future of public Iran spoliation in the city of Vilnius and the proposal to provide assistance in renewing the public transportation fleet of Vilnius.

Once a group of legal entities were selected by open tender procedures, including the Research Institute of Territorial Planning of Vilnius Gediminas Technical University, municipal enterprise “Vilniaus planas”, UAB “Urbanistika”, “ASL” and French company SYSTRA SA, prepared and the Vilnius City Municipality Council adopted a resolution No. 1-961 “Regarding the Approval of the Solutions of the Project “Preparation of a Special Plan for the Implementation of New Modes of Transportation in the city of Vilnius” of 19 December 2012, all preconditions for the optimization of Vilnius public transportation network were met. In preparation for the special plan, the operation and trends of the existing transportation system and public transport of the city of Vilnius were taken into consideration, and new modes of public transportation were analysed and proposed, taking into account the proposals and comments made by Vilnius residents, foreign experts and local scientists.

The approved special plan focuses on the reorganization of the trolleybus route network because, unlike bus routes, these lines have a contact and cable network with special support and traction substations. It should be noted that, currently, the average age of the Vilnius trolleybus fleet is more than 18 years, and the majority or traction substations and the contact and cable network system need major repairs. This requires large investments that are not currently planned for in the Vilnius city municipality budget in the near future due to certain practical circumstances.

Taking into consideration Directive 2009/33/EC of the European Parliament on the promotion of clean and energy-efficient road transport vehicles and our plans to replace the existing outdated trolleybus fleet with more innovative electric buses, we would be grateful if the International Public Transport Association could mediate in the allocation of funds from the European Union Structural Fund for the renewal of the public transportation fleet of the city of Vilnius.

Mayor of the City of Vilnius

A comment from troleibusas.lt is very short – as you can easily see themselves what was written, asked and offered in the letter from UITP and what is the answer, what’s shunned in the answer or where you can simply see lies…

We have got an appeal signed by the Secretary-General Alain Flausch of the International Association of Public Transport (Union Internationale des Transports Publics, UITP), sent in 10th of May, 2013 to the Mayor of Vilnius  Arturas Zuokas, also addressed to the Board Chairman of “Vilniaus Viešasis Transportas”  Romas Adomavicius and Minister of Transport of the Republic of Lithuania Rimantas Sinkevicius.