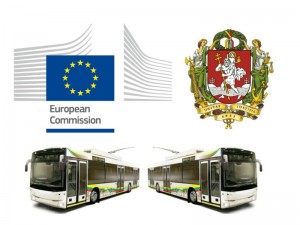 In February, we have received a copy of the letter, which was sent from the Vilnius City Municipality, Department of Economy and Transportation. This letter has been prepared by Mr. Kastytis Lubys and signed by Temporary Deputy Director Jurate Vitkute-Paulioniene (2014-02-10 No. 51-11782/14 (3.3.10.3-EM4)) and it was a response to a letter which was sent by a trolleybus driver who cares about the future of trolleybuses or buses in Vilnius.

We inform you that your thoughts on the trolleybus efficiency and cost-effectiveness were re-examined in the Department of the City Economy and Transport by specialists of Urban Transport department in conjunction with the specialists from municipal company “Susisiekimo paslaugos” and specialists of JSC “Vilniaus viesasis transportas”.

You had detailed responses for many times about trolleybus prospects in Vilnius from the specialists of City’s Economics and Transportation Department. Your belief that the trolleybus parks maintain bus parks is wrong, because in the currently serviced public transport routes the cost of 1 kilometer bus routes is less than the cost of trolleybus routes.

We are delighted to know about your intentions to appeal to the European Union institutions on the development of eco-friendly vehicles. The European Commission’s White Paper anticipates that by 2030, the local regular passenger transport services to be provided by electric buses, eliminating the cumbersome and costly trolleybus overhead network.

Thank you for your comments and suggestions and we are looking forward to a constructive cooperation in the implementation of environmentally friendly transport in Vilnius.

In this reply, what is worth paying attention to?

First. “In the currently serviced public transport routes the cost of 1 kilometer bus routes is less than the cost of trolleybus routes”. Let’s examine the situation which we had before we have got that reform which has brounght “onl positive changes” and which “satisfies all passengers”.

Let’s have a look at the numbers one more time – how much does it cost to run 1 kilometer:

It is unlikely that a price to run 1 kilometer with a diesel or gas bus has reduced –  neither fuel nor additional operating costs (oils, antifreeze, etc.) got cheaper, it could happen only if salaries were cut or quality of maintenance was decreased (for example, non-original or used parts are being used to do repairs instead of new original ones). So if the cost of 1 kilometer to run a trolleybus, which was cheaper (and significantly cheaper) before the reform than any type of bus, now actually become bigger (by the way, it is difficult to verify if this is true because the data is not publicly available) – what are the reasons?

Probably few who remembers public speeches of Mr. Kastytis Lubys made  in summer and fall of 2013. When the figures above were mentioned to him, Mr. Lubys said that the trolleybus has a lower cost yet. We have not paid a proper attention to that expression “yet”, but now one more goal of “reform” is clear – it was their intention to make trolleybuses to look like it is the monst expensive mean of transport (this was intentionally made with the help of ridiculous schedules when a bus comes just a minute earlier than a trolleybus to a bus stop, or several trolleybuses arrive to a bus stop at one and then you need to wait 15 – 30 minutes for another vehicle). This is pathetic, gentlemen from our municipality and “Susisiekimo paslaugos”, but of course when there’s no conscience – any methods are suitable to prove that you are right…

Second. The letter sarcastically responds to the caution that the European Union institutions will be contacted in order to spread an information on Vilnius municipality policy regarding public transport. And even more – they audaciously distort the text of White Paper which is released by the European Commission. Vilnius municipality clerks say that, according to them, “the European Commission’s White Paper estimates that by 2030, the local regular passenger transport services to be provided by electric buses, eliminating the cumbersome and costly trolleybus overhead network”.

Let’s examine White Paper and let’s check whether it actually have these propositions what was claimed by the clerks of Vilnius municipality.

Let’s define at first, what White Paper is:

Commission White Papers are documents containing proposals for Community action in a specific area. In some cases they follow a Green Paper published to launch a consultation process at European level. When a White Paper is favourably received by the Council, it can lead to an action programme for the Union in the area concerned.

For us, one White Paper is important, which was released in 2011 and which is titled “Roadmap to a Single European Transport Area – Towards a competitive and resource efficient transport”.

This document (in English) can be also found here: eur-lex.europa.eu

Here you can see the White Paper, and specialists from Vilnius city municipality tell they are basing their words on it. It was not possible to find anywhere those words which are written by these “specialists” as a quote.

It was not possible to find anything similar that “the local regular passenger transport services will have to be provided by electric buses”, the same about eliminating trolleybuses or trolleybus overhead network. On the contrary – it is written there:

Page 6, Paragraph 19: In the future, “Improving the energy efficiency performance of vehicles across all modes” is necessary.

It is well known that the trolleybus motor efficiency is about 88%, the electric bus – up to 58% and it is even not worth to talk about efficiency of the internal combustion engine (as it is less than 40% and, moreover, as we shall see later, development of this technology is not supported by the EU ). So which technology is superior and more efficient in energy usage?

Ten Goals for a competitive and resource efficient transport system: benchmarks for achieving the 60% GHG emission reduction target
Developing and deploying new and sustainable fuels and propulsion systems
(1) Halve the use of ‘conventionally-fuelled’ cars in urban transport by 2030; phase them out in cities by 2050; achieve essentially CO2-free city logistics in major urban centres by 2030.

Let me ask you, where you can see a reference (or recommendation) to refuse trolleybuses, to exchange them into buses (conventional or electric)?

It is because of this falsehood and distortion of facts, we have wrote a letter to the European Commission – in order to get a confirmation that the clerks of Vilnius municipality are impudently lying.

Letter to the Director-General for Mobility and Transport of European Commission (March 30, 2014)

On March 30, 2014, we have sent a letter to Mr. Matthias Ruete, Director-General of European Commission Mobility and Transport, in order to ascertain the true position of the European Union, instead of the interpretations from municipality of Vilnius.

Letter from the Directorate General for Mobility and Transport of European Commission (April 24, 2014)

On April 24, 2014, a letter was received from Mr. Fotis Karamitsos,  The Acting Deputy Director-General of the Directorate General for Mobility and Transport of European Commission.

1) Trolleybus system is supported by the European Union in the same way as other systems which are not using the internal combustion engine.

2) European Union does not recommend (or does not require) to replace a trolleybus system with a bus, a tram or any other system.

3) The reference is given to one of the most recent EU projects (ZEEUS), with it’s help trolleybus development is being carried out, specifically in this case – in Rome.

4) This letter also refers to the EU-backed project http://www.trolley-project.eu/. Often, sites which are dedicated to trolleybuses are being criticized by their opponents as “biased” – let’s hope that this time such criticism will not be heard since this site has an officiall supported by EU.

So this letter from European Commission has once again confirmed that brash lie from the clerks of Vilnius city municipality. Therefore, the story does not end there – it’s further development will be described in the website www.troleibusas.lt.