Talks appear on public regularly that here and there some trolleybus system will be destroyed. Such stories is like some kind of plague – they are spreading widely and loudly – let’s say news agency BNS has distributed an article from one Estonian newspaper as if Tallinn is getting rid of trolleybuses in a few years, and this was said by a manager of transport company, nevertheless this information was not supported by any other sources.

Surprisingly, the evidence-based information about the new trolleybus systems and their development does not appear, although such process is going on. As we can see, anti-trolleybus lobbying groups even spend money and use tricks of public relations (so called “dark technologies”) in order to reach their goals.

Recently, a similar issue – a statement has appeared in our facebook page:

I have heard that trolleybuses will be destroyed in Salzburg and Tallin. Is that true?

This was based on a message written by a person from Estonia, Ааре Оландер (web search shows his intense interest in trams, and this gives some thoughts, too). He says that it’s not only Tallinn which is going to get rid of trolleybuses (and that trolleybuses will be replaced with conventional buses), he is claiming the same about Salzburg, too.

As such disinformation is disseminated regularly, we have asked this question the company Salzburg AG, which, among other services, offers public transport service in Salzburg. We have also received a letter on November, 2013 from the company representative, it was written there that such rumors are being distributed by one person and there’s no any treats to trolleybuses in Salzburg. Now the company have re-assured the same, and again, there are only lies distributed by one person – as approval of this, they have forwarded a copy of letter, which was sent on 20th of February, 2014 from the Mayor of  Salzburg, Heinz Schaden, to the head of the company Salzburg AG Gunter Mackinger. 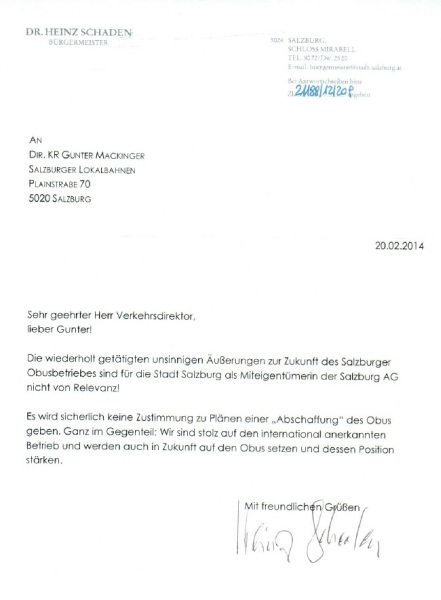 Here’s the text in original (German):

The repeated nonsensical statements made ​​on the future of Salzburg Trolleybus are not relevant for the city of Salzburg as a co-owner of Salzburg AG!

There will certainly be no approval to plans for a “shadowing” of the trolleybus. Quite the contrary. We are proud to put on the internationally accepted operating and will continue to the trolleybus and strengthen its position.

Let’s hope that all is clear now that some people are deliberately (and some perhaps out of ignorance) publish fabrications about the future of Salzburg trolleybus. Maybe about Salzburg they will be silenced now.

It is also tempting to hope that people will finally critically assess the information which they find online, even if looks plausible at first glance, but is based on one person. Unfortunately, nowadays propaganda and lobbying win, not objective information, facts and figures. Let’s try to resist this and let’s try to distinguish the truth from the lies.